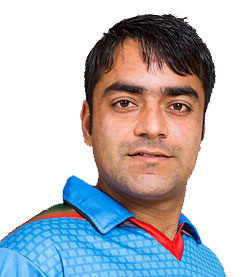 
Rashid Khan Arman (born 20-Sep-1998; Nangarhar) is a right-handed batsman and legbreak googly bowler, who plays international cricket for Afghanistan. He made his international debut in ODI against Zimbabwe at Queens Sports Club, Bulawayo on Oct. 18, 2015.

Rohit up to No.2, Kuldeep rises to No.3 on ODI tables

Rahmat, Shahidi, Nabi star as Afghanistan go 1-0 up [+]
Afghanistan registered a 60-run win over Zimbabwe in the first one-day international at the Harare Sports Club on Saturday.

Liton, Nasum power Bangladesh to series lead [+]
Afghanistan were reduced to 20 for 4 in the run chase, eventually folding up for 94.

Gurbaz unbeaten ton help Afghanistan avoid whitewash [+]
Batters, with the exception of Litton Das, let Bangladesh down as they are bowled out for 192.